Brick works in the Cotehill area

In the middle of the nineteenth century the demand for bricks increased significantly as towns became larger and more industrialised. The manufacture of bricks took place in small works which would usually be situated adjacent to clay pits where the raw materials could be excavated. The works also had to be conveniently located for the new buildings to minimise transport. The process involved drying out the clay, moulding or shaping it and then firing it in a kiln. Suitable clay for brick making had to be free from stones and other impurities. Such material was found in deposits approximately one mile north of the village of Cotehill on land that would later be adjacent to and beneath the S&C railway.

It is believed that pottery making (using similar clay to brick and tile making) had been carried out in this area since mediaeval times[1] and references to brick making appear around 1841. The first edition of the Ordnance Survey six inch to one-mile map surveyed in 1865 shows a clay pit and adjacent tile works. By 1890 there were three brick and tile works in operation and the locations of these are shown in relation to the S&C in figure 1 which is based on the second edition OS map. By the time the second edition of the Ordnance Survey was published in 1901, the clay pit shown on the first edition were disused and the works demolished. 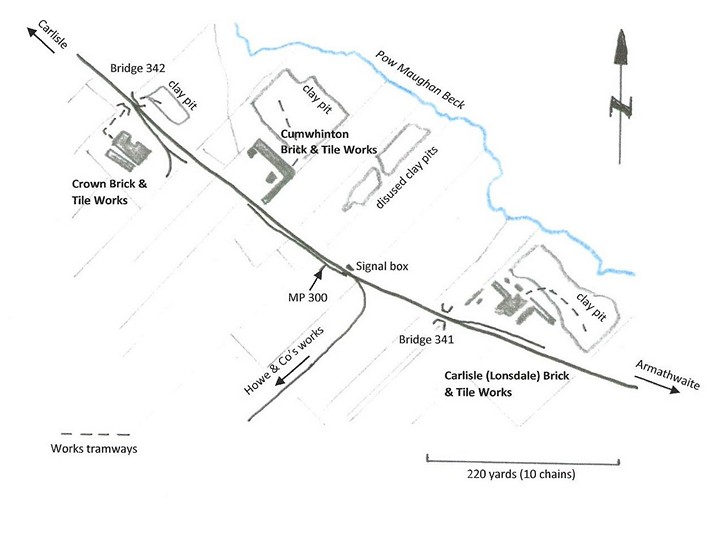 Figure 1: Map showing the locations of the three brick works in the Cotehill area.

The three works shown are:-

These are described in more detail in the following paragraphs.

The Crown Brick and Tile Works

These works consist of a clay pit on the east side of the railway with the production plant on the west side. The two were connected by a tramway which ran beneath Bridge 342 (303m 13c) but there is no evidence that this was operated by a locomotive. It is not clear when production started but it is thought that the works were established in 1885[2]. The owner was John Beaty & Co. who were builders in Carlisle and in 1897 John Beaty was recorded as a brick maker at Cotehill. The Midland Railway constructed a siding into the works from the Down line, often referred to as Beaty’s Siding and this is described by Anderson and Fox[3]. In 1904 the works were advertised for let but it’s presumed there were no potential purchasers since in the following years Beatys were still advertising drain tiles. Eventually the business was offered for sale in 1919. This attempt to sell was also unsuccessful and it was re-advertised in 1921. The works closed and the machinery, with or without the works was sold in October 1924.

The rail connection to the former Gypsum works at Cocklakes was lifted in the early 1980’s and it is likely that the wartime sidings were also lifted at this time.

Today, there are no visible remains of the buildings or rail siding but there is evidence of the pit, now being used for angling.

The Cumwhinton Brick and Tile Works

The site of the Cumwhinton Brick and Tile works appears to have been acquired by the Midland Railway to produce bricks for use in the construction of the line. It is likely that this works was the source of the bricks used for tunnel lining at Baron Wood and Armathwaite.

The pits shown as disused on the plan above (based on the Ordnance Survey map of 1901) were most likely the source of the clay for these bricks. It became disused on completion of the construction of the line and the kilns and other equipment for brick making removed. On 1st January 1877 it was leased to G.M. Tickle, a contractor and brick maker from Maryport.

Tickle and his brickworks were to play a part in a case of fraud against the Midland Railway by Edwin Westerman, the Superintendent of the Settle & Carlisle line, Thomas Herrick , the Permanent Way inspector for the Carlisle to Newbiggin section, John Lambert, the stationmaster at Cumwhinton and George Tickle, the brick maker. It was heard at the Manchester Assizes in October 1877. The case centred around the use of company materials, including surplus bricks from Baron Wood and Armathwaite tunnels, both for the construction of a new house and other works for Westerman near Cumwhinton Station and the construction of new kilns at the brick works. Company ballast trains were used to move the materials, thus avoiding freight charges. More details can be found in contemporary newspaper articles summarised in Occomore’s recent book[4]. The outcome was that Westerman and Tickle were sentenced to 12 months in prison and Herrick 6 months in prison. Lambert, although guilty of irregularities, was discharged by the Judge.

New works were opened around 1883 by Thomas Hamilton who was a brick maker based in Scotland with works at Braidwood in Lanarkshire. Railway access was provided in the form of an extension to the headshunt at the north end of Howe & Co’s sidings. On a 1927 LMS survey, a level crossing is shown just to the north of the end of the siding for Hamiltons and it is possible that this was used to transport bricks across the railway for loading in the siding.

Thomas Hamilton retired in 1902 and the works was sold to Nicholas Wright who continued operations under the same name until some time between 1910 and 1914. In 1914 Wright’s occupation was listed in a Directory as a Market Gardner[2] so it is assumed that brick and tile making had ceased. The name of the business was changed to Messrs Wright[1] in 1918.

The siding was taken out of use in 1924 and the buildings have since been cleared but the pit remains.

This was originally owned by Claude Lonsdale and is often referred to as the Lonsdale Brick & Tile Works. It is thought to have been in production by 1884[1] and in August 1886 surveys were carried out by the Midland Railway for the provision of a siding[3]. This siding was located at 302m.67½c. on the Up side and was opposite the south end of Howe & Co.’s sidings.

During the 1890s bricks, drainage, and roofing tiles were offered from what was called Carlisle Brick Tile & Pottery Works. By the early 1900’s the product range had expanded to include chimney pots and ornamental items, mostly for the garden. The works produced a distinctive T-shaped chimney pot which was commonly used in Carlisle.

By 1911 ownership had changed to M Richardson & Son but by the late 1920’s the works were disused and derelict. In early 1930 the site was purchased by the Carlisle Plaster and Cement Company who were operators of the nearby Cocklakes Gypsum mine and production plant. They viewed it as a viable proposition and by 1931 were again producing bricks and tiles. They also initiated the production of dried clay blocks which were used in the manufacture of hardwall plaster. These blocks were sold to McGhie’s plaster works at Kirkby Thore and presumably transported there by train. Subsequently both the Carlisle Plaster and Cement Company and Thomas McGhie & Sons would be taken over by British Plaster Board (and then became British Gypsum).

The site was sold again around 1949 to the Lonsdale Brick & Tile Co. Ltd. Production continued until around 1982 but the trackwork of the rail siding was removed in October 1964.

An internal 2ft gauge rail system was used to transport material from the pit to the works and in the 1960’s an ex WD Hunslet diesel loco (Works no. 2577 of 1942) was acquired for the system. This loco was sold for preservation in 1973[5].

By 1993 the remains of the clay pits were still present along with the moulding and drying shed[6]. Two downdraught kilns remained also but these and the sheds were demolished in 2004. More recently the site has been redeveloped and landscaped for recreational fishing with accommodation[7]. It incorporates the clay pits from the adjacent brickworks to provide 5 fishing lakes and is visible from southbound S&C trains.