During severe winters, deep snowdrifts were a frequent cause of disruption on Britain's railway network. Within the SCRCA, Dentdale was particularly prone to drifting snow. In a bid to keep the snow off the tracks, a series of snow screens (also known as a snow fences) were erected in parallel lines along the upslope side of the railway. They were formed by up-ending sleepers and burying a portion of their length in the ground. Unfortunately, these structures proved to be totally ineffective and all that remains today are the skeletal remains of the more weather-resistant timber sleepers.

Snow Screens in Dentdale (between Arten Gill and the Coal Road)

Snow Screens in Dentdale (north of the Coal Road) 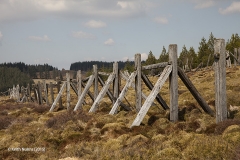