In 2007 the Yorkshire Dales National Park Authority (YDNPA) asked the Ingleborough Archaeology Group (IAG) to undertake a 'mitigation programme' for the archaeological remains of 'building n6' (one of the structures within the Ribblehead Construction Camp). The aims and objectives of the mitigation programme were to:

- remove existing rubble within the stone spread to reveal the structure’s external form,
- expose any external wall lines and internal features,
- provide a detailed record of the structure,
- attempt an interpretation of the structure and to suggest its original functions,
- backfill on completion and leave in a secure manner with wall lines exposed.

This 'destructive' intervention was deemed necessary because a Monuments At Risk Survey in 2005 found evidence that the site (which lies within a Scheduled Ancient Monument) had been illegally disturbed.

The excavation took place between Monday 28th May and Thursday 31th May, 2007 and it yielded a significant number of finds, most notably:

The excavation also uncovered two stacks of bricks inside the building:

After the excavation and recording work had been completed, the site was backfilled by hand. "The project brief required the backfill to be levelled off leaving a 'stable, interpretable structure' with 'small sections of wall' left exposed for the long-term."

The three photo-montages below include a small selection of the digital photographs taken during the excavation process.
(Tip: To view larger versions, click / tap on the thumbnails.) 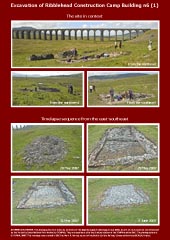 Image A: The site in context and a time-lapse sequence. 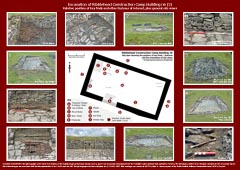 Image B: The key features of the site and a site-plan. 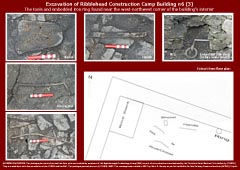 Image C: Some of the key finds in-situ.

The building was broadly oblong in plan.

The rear (north) wall was the sturdiest, while the front (south) wall "was footed on very small stone; and the two gable walls were of poor quality build, especially at the southern ends. It is believed, therefore, that the building had a monopitch roof: the gable walls were too narrow to have supported a wall reaching to full ridge height." The team concluded that the roof probably sloped downwards from rear to front, perhaps to reduce the impact of the prevailing south-westerly winds.

The front wall included a wide doorway and a glazed window.

The interior floor was covered with stone and "a small sump drain . . . capped with a cast-iron grid cover measuring 220mm by 220mm" was set into the floor just inside the doorway. "The sump drained out of the doonway beneath the wooden threshold. . . . The eastern section of flooring differed markedly from the western, though it was all composed of limestone blocks of uneven and varying sizes. For almost 2.50m from the east gable wall, extending from the rear to the front wall, all the stone blocks had been inserted vertically with their long edge forming the floor surface. To even this off, crevices between individual blocks had been packed with lime mortar and the entire surface had been similarly coated with lime mortar. It is known that such treatment limits rising damp within buildings. The remaining 6.60m of floor, again extending for the full depth of the building, had a floor composed of limestone blocks laid horizontally to give a more or less even surface. Between larger blocks small pieces of stone had been packed in to seal the gaps. Approximately 2.20m to 2.80m from the west gable, extending for almost 3m from the rear wall, there was a possible patterning of the flooring blocks."

"Set into the rear (north) wall was what proved to be the building's most perplexing feature. A sturdy cast-iron ring, pivoted on the end of a long cast-iron bar, had been built into the wall during its construction 4.12m from the western end of that wall, and 190mm from the floor. The bar extended right through the rear wall, was then braced by a vertically-set wooden batten laid against the wall's exterior face, and then extended into the natural banking behind the building. How far it extended could not be determined. The bar had a thickness of 30mm as did the fixed ring at the end which had an internal bore of 40mm. Threaded onto this fixed ring was the free-swinging ring, also with a diameter of 30mm but with an internal bore diameter of 100mm. It was clearly meant to restrain or secure something either very valuable or very substantial in size and/or weight."

"The building was approached along a pathway or trackway from the south. This had clearly been constructed rather than having formed by wear and tear on the ground surface. From the threshold it was vague in extent but, where it dropped downslope, it became marked and joined a similar pathway leading from the residential area known as Belgravia (n7 in the NAA survey), which in turn passed to the north-west of the lime kiln to join a tramway that served both the quarry adjacent to the lime kiln and the brickworks."

The excavation team concluded that the "the building performed a dual function with the eastern section having been an office and the rest a storeroom". The following evidence led the team to form this conclusion:

"The excavation process confirmed that the building had been deliberately demolished rather than having been abandoned to slowly decay and collapse. . . . the balance of probability tends to suggest it was demolished at abandonment".

A brief summary of the excavation is available on the following page of the IAG website:
http://www.ingleborougharchaeologygroup.org.uk/ribblehead.htm

A copy of the full IAG report1 can be downloaded (in pdf format) from the YDNPA's 'Out of Oblivion' website via the following link:
http://www.outofoblivion.org.uk/pdfs/reports/SYD12997-ribblehead-railway-construction-camp.pdf

1: "Ribblehead Construction Camps. Excavation of Building n6. Summary Report on an Excavation carried out by the Ingleborough Archaeology Group on behalf of the Yorkshire Dales National Park Authority." (2007)

This summary was compiled by Mark R. Harvey in 2017 as part of the SCRCA Project. All text formatted in italics is quoted directly from the excavation report. (© Mark R. Harvey, the Ingleborough Archaeology Group and the Yorkshire Dales National Park Authority).

The author would like to thank David Johnson (Honarary President of the Ingleborough Archaeology Group) and Miles Johnson (Senior Historic Environment Officer for the Yorkshire Dales National Park Authority) for kindly granting permission to summarise and reproduce material from the 2007 excavation report1.