For the purposes of the SCRCA Project, the term 'navvy settlement' refers to the archaeological remains of a distinct cluster of temporary buildings constructed specifically to provide accommodation for workers and their families during the construction of the Settle-Carlisle Railway between 1869 and  1876. In all cases, the buildings themselves have been demolished. However, in many cases, archaeological traces remain in the form of visible earthworks (e.g. building platforms) and / or sub-surface archaeological deposits. In some cases (usually in the more remote locations such as the Ribblehead area), there were multiple 'navvy settlements' associated with a single 'Railway Construction Camp'. (The latter term is used on the Scheduled Ancient Monument listing for Ribblehead so, for consistency, it is also being used here.) In addition to clusters of dwellings, some of these construction camps included the additional buildings and services needed to create a fully-functioning independent community (e.g. a shop, school, church / chapel, workshops, etc.).

To provide a workable classification hierarchy for the Ribblehead area, the 'camp' has been created as an SCRCA 'site' and the buildings (including discrete clusters of buildings of the same type and function) have been created as a 'structures'. It is arguable that clusters of dwellings ought to be classified as 'sites', with the individual dwellings being classified as structures.  However, doing this would necessitate the introduction of a third level of classification, which would significantly complicate the database. In the case of the Ribblehead Railway Construction Camp, it would also require the accurate plotting of the location of each individual building, plus a reliable assessment of the primary purpose of each building. Unfortunately, this level of detail is not currently available in the official records. As three levels of classification are not needed elsewhere, classifying the archaeological remains of a discrete cluster of temporary dwellings as a single 'structure' seems to be a reasonable compromise. The term 'navvy settlement' has been used as the name for the structure variant as it was - and still is - commonly applied to distinct clusters of dwellings associated with large Victorian-era construction projects.

In the 2016 edition of his publication "Settle-Carlisle Railway Directory of Resources", Nigel J. Mussett lists a total of 67 navvy settlements associated with the construction of the line. In the long term, it is hoped that all of these sites can be added to the SCRCA Project database. However, the precise location of many of the settlements is uncertain and the team's limited resources means that some form of prioritisation has been necessary. As a starting point, we have decided to focus on the five navvy settlements known (or believed) to have been located within and immediately adjacent to the Ribblehead Railway Construction Camp Scheduled Ancient Monument. It is intended that additional sites will be added as and when resources allow, probably focussing initially on the section of line between Salt Lake and Dent Head as per the accompanying map. (Tip: To view a larger version, click / tap on the map).

The following examples from the SCRCA Project database illustrate this location variant. Locations are only displayed here if they have been 'assessed' and if a default image is available.   Show / hide tips 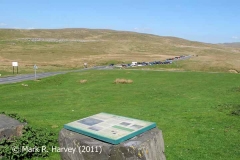 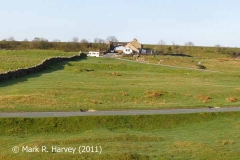 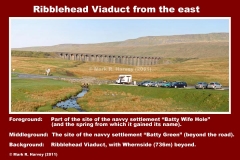 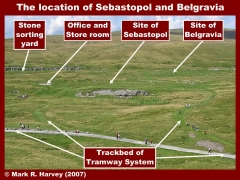