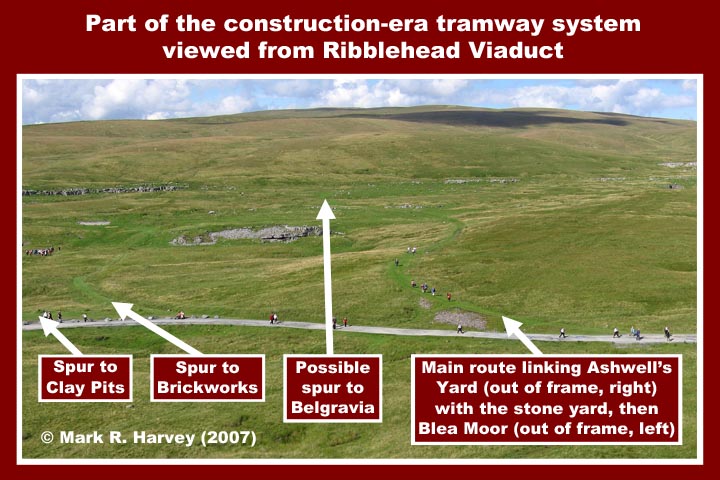 Several parts of the abandoned tramway system are clearly visible in this photograph. They appear as darker green lines of smoother grass, curving through the rougher vegetation. Also, the grey-coloured access road lies on the alignment of a section of the tramway.

The site of the brickworks is marked by a small cluster of people in the rough grass (extreme left).

The stone sorting yard lies at the foot of the scar (i.e. the long thin grey-coloured cliff face) above this group of people at the brickworks.

The office / store is the small, slightly skewed oblong patch of grey between the brickyard and the stone sorting yard.

The limekiln and adjacent small quarry lie to the right of the brickworks.

A more fully annotated version of this photograph is provided on the summary page for the Ribblehead Railway Construction Camp.

The photograph was taken from Ribblehead Viaduct during the specially organised "Ribblehead Viaduct Walk" event on 22nd July 2007. The line was closed for engineering works and specially trained guides were authorised to accompany pre-booked groups across the viaduct under the close-supervision of Network Rail personnel. The photographer was one of those guides.