Long Marton Station has a goods yard consisting of a couple of sidings, a loading dock, a goods shed capable of holding three wagons and a yard office and weighing machine. Although the station closed in May 1970, the goods shed and yard office have survived and both are now Grade 2 listed[1]. Goods traffic would have typically been the receipt of parcels, coal and agricultural supplies and despatch of agricultural produce.

This part of the Eden Valley is well known as a source of Gypsum and during the 1890’s Gypsum quarried at the nearby Hunter Quarry was brought by horse and cart for loading and onward transport. This continued until the Gypsum quarries had their own dedicated sidings constructed (see The Gypsum Industry and the Settle-Carlisle Railway).

Mining for other minerals has also taken place in the area and in 1941 an additional siding was constructed at the request of B. Laporte Ltd for the export of Barytes mined at Silverband Mine. The loading hoppers are illustrated in Plate 147 of Anderson & Fox[2] by a photograph taken in September 1963 after closure of the facility. No trace of these remains today.

An indication of the quantity of Goods Traffic at Long Marton is given by David Jenkinson[3] and summarised in table 1 below.

Barytes is Barium Sulfate (BaSO4) and is a cream coloured mineral which is very dense (approximately 4.5 tonnes/m3 – compared with around 2 tonnes/m3 for limestone). Today, its main use is as a constituent of drilling muds in the hydrocarbon industry, because of its density. It has also been used in paper, paints and the manufacture of chemicals. These include barium chloride, a component of pigments and used for case hardening steel. Barium carbonate, an ingredient in glazes in the ceramics industry is another product derived from Barytes.

B.Laporte Ltd was established in 1888 at Shipley near Bradford to manufacture chemicals for use in the textile industry[4]. In 1899 it established a second production facility at Luton to supply the hat industry with chemicals. Its main product was hydrogen peroxide, which was produced from barium peroxide, which in turn was produced from Barytes. Initially the barium peroxide was imported from Germany until World War 1 when alternative sources of Barytes were identified in Shropshire and Devon enabling the production of barium peroxide to be done in the UK. In the 1930’s these UK sources of Barytes were not sufficient to meet demand and some material was imported from Greece whilst further examination of potential UK sources was carried out.

After this search, in January 1939, the Laporte board agreed to proceed with the reopening and development of Silverband Mine which had been identified and was considered to have extensive reserves of Barytes. The mine is one of several workings which are located within half a mile of the summit of Great Dun Fell (2,780 ft) , at an altitude of some 2,300 feet, and as such are probably the highest mineral workings in England, located in the highest part of the Pennines.

Great Dun Fell is clearly visible from the Eden Valley and further afield. It is easily recognisable because of the presence of the National Air Traffic Service radar station on the summit with its distinctive “golf ball” radar dome.

The workings at Silverband date back to the late seventeenth century[5] and had been developed to produce lead which occurs over a large area of this part of the Pennines (referred to as the Northern Pennine Orefield). The lead deposits have been formed in cavities in the limestone and occur with Barytes and some other minerals. Other minerals found in association with lead deposits in the North Pennines include Sphalerite (zinc sulfide), Fluorspar and small quantities of Silver.

The development of the mine continued through 1940 and included the construction of a processing plant at Murton Grange, 3 miles away. Normally this plant would have been constructed close to the mine entrance but given the remoteness, climatic conditions and access difficulties to the mine, it was situated at the foot of the mountain. The extracted material was taken for processing by an aerial ropeway (see figure 1 below) for the 3 miles to the processing plant and then another ropeway, 2 miles long carried the processed material to hoppers beside a dedicated siding at Long Marton Station for loading onto rail wagons and subsequent transport to Luton. 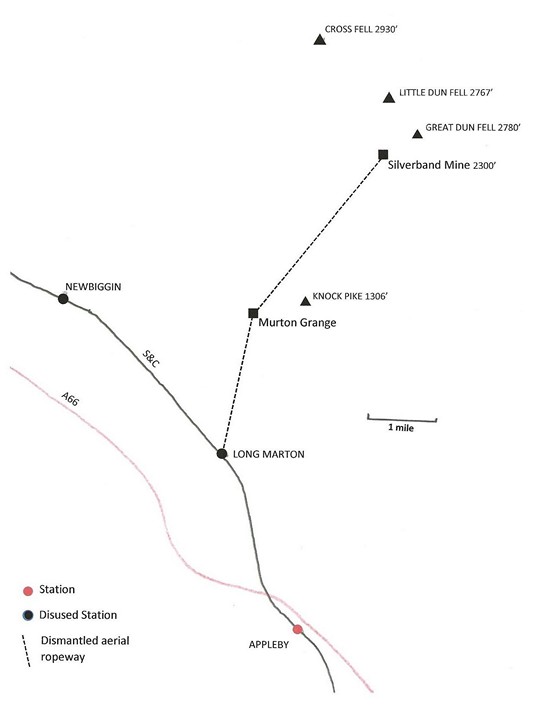 Figure 1: Map showing the relative locations of the Silverband Mine, Long Marton Station and the connecting aerial ropeway.

The underground levels of the mine were reopened to gain access to the Barytes and stabilisation of the roof of the workings was needed in several places.

By 1944, 59 men were employed in the operation. Of these, 28 worked underground and 31 on the surface including operating the ropeway and the mill. The scale of production in the first years of operation can be seen in table 2 below (taken from H.L.Salter[4]).

These figures also show that processing to achieve the required quality reduced the quantity of Barytes to around 50% of the material extracted.

There appears to be some discrepancies between these figures and those averages of Jenkinson tabulated above. It is not possible to comment any further on this without more detailed knowledge of the sources and bases used.

In the immediate post war period, Laporte acquired further small Barytes mines in the area at Hartside, Scordale and Long Fell. These were much smaller operations and the output was taken to Murton Grange by road for processing. They had all been closed by 1950 because of either limited mineral resources or being uneconomic to operate.

Silverband itself continued production until Laporte ceased operations there in 1963 when it was judged to be uneconomic because a cheaper source at Eyam in Derbyshire had become available. The aerial ropeways were dismantled and sold to a ski centre in Scotland. As shown in the Anderson & Fox photograph mentioned above, the dedicated railway siding serving the hoppers at Long Marton Goods Yard had been lifted by September 1963.

It has been estimated[6] that some 215,000 tons of Barytes had been produced by Laporte during its operation of the mine. More or less all of this material would have been taken away on the Settle -Carlisle railway.

By 1970 the lease of the mine had been acquired by H Taylor who built a mill at the mine and worked using opencast methods extracting a further 75,000 tons by 1980. This would have been transported by road using a track from the mine. In 1983 a local contractor, Cragg and Cuttrass took over the lease and continued opencast working. The lease changed again in the late 1980’s to the Silverband Barytes Company and finally around 2000 to Waitings Minerals. Opencast mining was carried out by these later operators and Waitings also reprocessed the waste tips. Mining finally ceased in 2005 when the 1970’s mill was demolished and the site cleared except for an old bothy. The site was then landscaped, removing most of the signs of the activity that had taken place.

In 2003 the remains of the aerial ropeway, associated brake house and an earlier stone incline were listed as an Ancient Monument. Approximately 1.75km of the line of the ropeway are included in the listed area which also contains the bases of several pylons and some damaged remains of pylon steelwork.