This fascinating natural feature is gradually encroaching on the railway (see the cutting wall to the right of the photo below). It is being formed by the calcium-rich water that flows slowly down the side of the cutting at this location for most of the year. The water coats the moss (which thrives in this damp, shady and sheltered location), then evaporates, leaving behind limescale (much like that found in a domestic kettle). The limescale gradually covers the moss, then new moss grows on top of the limescale. This tufa screen cannot be more than around 140 years old as the cutting was created between 1869 and 1873. The growth rate of the tufa screen can be seen by comparing the photograph immediately below (which was taken in 1978) with the video still from cab-view video footage shot in 2012 (see the Image Gallery). In the intervening 34 years, the tufa screen has completely engulfed the half-mile post. 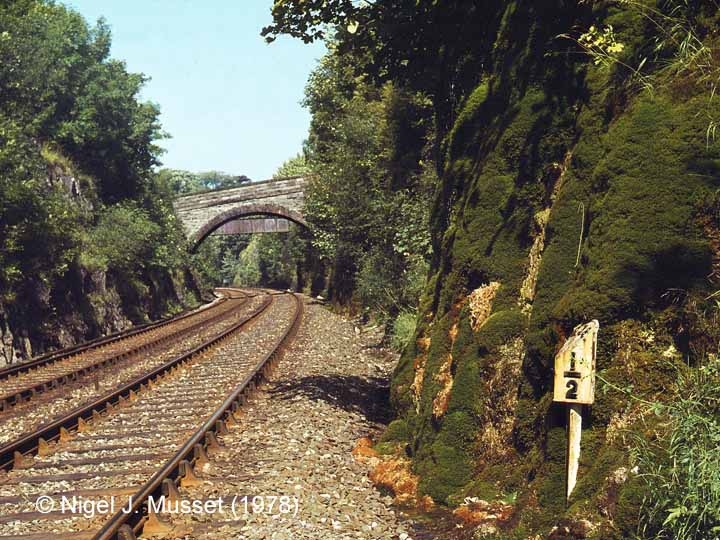 Location Type
Natural Feature
Location Variant
Not Applicable
Assessment status
Assessed
Current Use(s)
Not Applicable
Shown on a land plan?
No
Construction / installation period
Unknown: The date / period of construction is not known.
Distance from London St.Pancras
238 miles (chains not estimated)
Position relative to running lines
Up
Visibility
This location is NOT visible from nearby publicly accessible land.
Accessibility (ease of access)
No Access
Protection Category
Conservation Area Only
Geographic Location
View this location on mapping. or on aerial imagery. 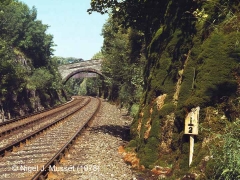