The Long Meg Mine is located approximately one mile north of Little Salkeld on the east bank of the River Eden adjacent to Eden Lacy Viaduct which carries the S&C over the river (see figure 1). It is named after the largest stone associated with a stone circle located on the field above the mine (see Images 1 & 2).

Quarrying was first recorded here around 1870 and commercial operations began in 1879 with the opening of three quarries in the riverbank. A mill was constructed to crush the extracted rock which was then laid out in heated pans to remove the natural moisture. When the product was dry it was bagged and taken to Little Salkeld Station for onward distribution.

The initial operators were taken over in 1880 and the Long Meg Plaster Company established. Problems with overburden disposal and lack of space for processing meant that underground working had to be introduced in the early 1890’s.

The only access to the mine was via a cart track from the village so in 1896 a single track siding (Location ID 290950) was laid and connected to the S&C railway, controlled by a standard Midland Railway signal box situated on the up side just south of milepost 291 (Location ID 290930). 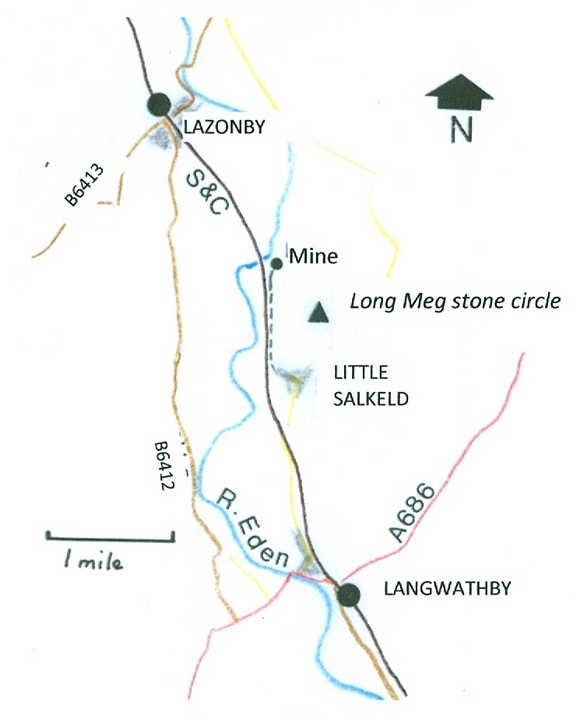 Figure 1: Location of Long Meg Mine.

Although both Gypsum and Anhydrite were available in the mine, Gypsum was the prime product. As mining developed, the proportion of Gypsum found decreased considerably and the company ran into financial difficulties. During 1911 the company amalgamated with two other Eden Valley  producers to form the Carlisle Plaster & Cement Co. The new company took the mined material to Cocklakes at Cotehill for processing. The Gypsum seam was becoming unworkable and this combined with the onset of the First World War creating a lack of manpower caused the mine to be closed in 1915. In May 1915, the signal box was closed and replaced with a three-lever ground frame.

In the early 1920’s demand for Anhydrite from the chemical industry increased and the mine was reopened in 1922 by a new company, the Long Meg Plaster and Mineral Co. Ltd. Initially Anhydrite was supplied to ICI at Billingham on Teeside, but this only lasted for a few years. In 1924 a second-hand 0-4-0 locomotive was purchased for use on the underground 24” gauge network to extract the mined material. A second 0-4-0 standard gauge locomotive was also purchased for shunting duties, but this only lasted until 1930 when it was scrapped.

Capital to develop the mine was not readily available and despite some improvements in 1936, the mine closed again in 1939.
During 1939 the share capital of the Long Meg Plaster and Mineral Co. Ltd was purchased by British Plaster Board who already owned the mines at Cocklakes (Cotehill) and Kirkby Thore. The mine was re-opened and by 1941 was producing Anhydrite to manufacture Sulfuric acid.

During 1949 exploratory borings proved the extent of the large deposits available and further development took place enabling the company to win a 20 year contract for the supply of 2,500 tons per week of Anhydrite to the United Sulfuric Acid Corporation Ltd at Widnes. This was to begin in 1954 and the quantity was expected to increase to 5,000 tons per week after a few years. The proximity of the railway was a key factor in the company winning this contract. The mine was extended and modernised and seven rail sidings were constructed together with a new signal box containing a 40 lever frame (Location ID 290840). This signal box was on the down side, to the south of the earlier box. The company also purchased new locomotives in 1949 and 1954 for working underground. Also, in 1954 an 0-4-0 saddle tank standard gauge loco was purchased for shunting duties. This was named "WST" after W S Trimble, one of the company’s directors. The new sidings and signal box were commissioned on 3rd July 1955.

By 1961 production for Widnes had reached 1,000,000 tons and this was celebrated by both the mining company and British Railways with a 9F 2-10-0  steam locomotive carrying a special headboard and flowers hauling the train carrying the millionth ton. Three trains per day normally ran and these consisted of about 20 wagons (Loading around 700 tons) hauled by a 9F locomotive. The train paused in the sidings at Blea Moor and awaited the arrival of a northbound train of empty wagons from Widnes. The crews then swapped trains and returned homeward.

The mine was developed further and more automation was introduced but by the early 1970’s production was reducing and extraction costs increasing as the working areas became further away from the mine entrance.

In 1975, the decision was taken to close the mine on 31st January 1976. Useable machinery was then stripped out and the adits backfilled. Once mining ceased, the pumping of water from the workings also stopped and the mine became inundated with water rendering it inaccessible.

The 0-4-0 Andrew Barclay steam loco "WST" was transferred to work at Cocklakes in 1969 and ultimately in May 1981 moved to the Bowes Railway at Gateshead for preservation.

The mine had been worked for almost 100 years and during that time it is estimated that more than 5,000,000 tons of mineral had been produced. The mine had also created work for hundreds of local people during its life and prosperity in the small neighbouring communities.

The rail sidings were lifted during 1981 and the signal box remained in use until 1983. It was demolished in 2013.

Some of the buildings and structures associated with the mine are still evident and a Public Footpath runs along the edge of the site along the eastern riverbank. The former mine office building is now a private residence.

Additional information about Long Meg and her Daughters stone circle can be found on the Visit Cumbria website:
https://www.visitcumbria.com/evnp/long-meg-and-her-daughters/
and on the Historic England website:
https://historicengland.org.uk/listing/the-list/list-entry/1007866

A photograph of the 0-4-0 Andrew Barclay steam loco "WST" in restored condition is available on the Bowes Railway website:
http://bowesrailway.uk/explore/our-collection/